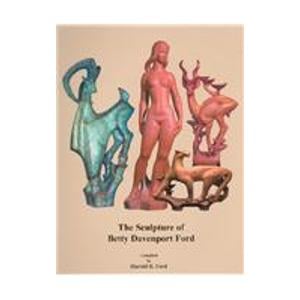 This book was compiled by Harold H. Ford the artists husband of 55 years. Harold received an Engineering degree and a graduate degree in Industrial Design from Caltech. After acquiring an old German camera as one of the first purchases after their marriage, Harold kept a complete photographic record of Bettys sculpture. He assisted Betty in every way he could and tried to provide a creative environment in which she could work. Most important of all he was tolerant of the creative chaos of an artists household.

During Ford’s early years she discovered the beauty of the animal form, a fascination that thematically reoccurred in her sculptures throughout her professional career. It was through the study of the form and anatomy of these creatures that Ford gained the ability to capture not only the likeness of her animal subjects, but their essence as well.

A professional sculptor, teacher and author, Betty Davenport Ford was born in Upland in 1924. She received her BA degree from Scripps College and her MFA from Cranbrook Academy in Michigan in 1950. Her award winning work has been exhibited throughout the country and she has taught at Scripps, Pasadena City College and throughout California for the Visual Arts Program. She created numerous public works of art including the large tiger of Chaffey High School in Ontario and several fountains for the Pomona Mall. She also worked with fellow Claremont artist Millard Sheets on numerous installations throughout Southern California. Betty created stunning pieces during the middle part of the century that are modern and timeless.